October 17th: International Day for the Eradication of Poverty 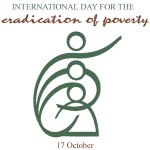 This day has been observed every year since 1993, when the General Assembly designated this day to promote awareness of the need to eradicate poverty and destitution in all countries, particularly in developing countries this was a need that has become a development priority. At the Millennium Summit world leaders committed themselves to cutting by half by the year 2015 the number of people living in extreme poverty, people whose income is less than one dollar a day.

Who Wants To Be A Millionaire Resource

March 1st: International Day for the Abolition of the Death Penalty