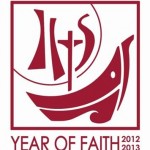 A Prayer for the Year of Faith

Year of Faith Activities and Ideas for Religious Educators: TheReligionTeacher.com

Daily email on the Catechism

The Year of Faith:

In 2011 Pope Benedict announced a special ‘Year of Faith’ would start in October 2012.

“Ever since the start of my ministry as (Pope) I have spoken of the need to rediscover the journey of faith so as to shed ever clearer light on the joy and renewed enthusiasm of the encounter with Christ.

… I have decided to announce a Year of Faith. It will begin on 11 October 2012, the fiftieth anniversary of the opening of the Second Vatican Council, and it will end on the Solemnity of Our Lord Jesus Christ, Universal King, on 24 November 2013.

The starting date of 11 October 2012 also marks the twentieth anniversary of the publication of the Catechism of the Catholic Church … Moreover, the theme of the General Assembly of the Synod of Bishops that I have convoked for October 2012 is “The New Evangelization for the Transmission of the Christian Faith.”

This will be a good opportunity to usher the whole Church into a  time of particular reflection and rediscovery of the faith.