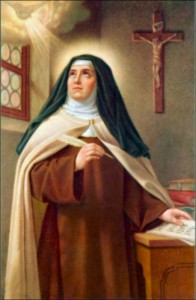 Teresa was born in 1515 in Avila. She proved at an early age that she was an intelligent and thoughtful person. Teresa and her brother, Rodrigo, didn’t play the same games that the other children played. Instead, they preferred to go to the garden and read. They were most interested in reading the Bible and the stories of the lives of the saints.

They were most fascinated by the stories of the saints. The idea of sainthood fascinated them. To them it seemed that the saints would be in the presence of God forever. In their childlike way, they would run around the garden chanting, “forever, forever, forever.”

When she was 16, Teresa was sent to a convent to live, and at 21 she decided to become a nun. She enjoyed her life there and began to realize that she had been given a special gift. She was able to see heavenly visions. She chronicled these visions in her writing. One such vision came in the form of an angel who appeared to Teresa bearing a long golden spear. The angel was smiling and gentle so he did not frighten Teresa. The angel thrust the spear into Teresa’s heart. Instead of feeling pain, Teresa felt safe and at peace. The spear was not really a spear, but the love of God. When the vision passed, Teresa felt very close to God.

Teresa did many great things. She knew how to pray and many people wanted to learn from her. She wrote books to help them. People still read those books today. She founded a convent, St. Joseph’s, whose focus was to be on a simple life of prayer. Other religious orders opposed her and made her life hard. But eventually her ideas spread through Spain and into other parts of Europe. She was the foundress of the Discalced Carmelites.

St. Teresa is the patron saint of persons who suffer from headaches.

St Teresa of Ávila, a sixteenth-century Spanish saint and mystic, was very aware that every Christian has a role to play in making Christ present in the world. She summed

this up in the following prayer:

Christ has no body but yours,

No hands, no feet on earth but yours,

Yours are the eyes with which he looks

Compassion on this world,

Yours are the feet with which he walks to do good,

Christ has no body now on earth but yours.

Yours are the hands, with which he blesses

Yours are the eyes, you are his body.

Christ has no body now but yours,

No hands, no feet on earth but yours,

Yours are the eyes with which

compassion on this world.