Watch the video above to learn more about Pope Francis. After you have watched the video answer the following questions.

1. What is Pope Francis’ birth name? 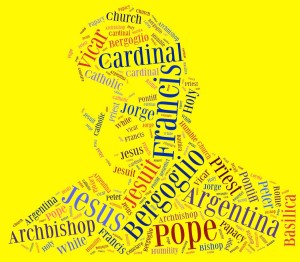 2. Where was his father born?

3. Where is Pope Francis from?

4. How old is Pope Francis?

5. Which order of priests does he belong to?

6. How many rounds of voting took place before Pope Francis was elected?

7. How many popes have there been since St. Peter?

9. When was Pope Francis ordained a Priest?

10. When was Pope Francis appointed a Bishop?

11. When did Pope Francis become an Archbishop?

12. When was Pope Francis made a Cardinal?

Click here to learn more about St. Francis of Assisi 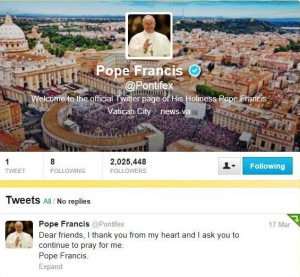 Send Pope Francis a tweet or letter. Feel free to include your own thoughts and prayers for his ongoing role as leader of the nearly 1.2 billion Catholics around the world. Understand that Pope Francis is very busy leading the Catholic Church. He may not be able to respond to your tweet or letter, but it is still nice that you send one. You can tweet Pope Francis @Pontifex or mail your card to Pope Francis at this address:

If you receive a return letter, share it with your family and friends. 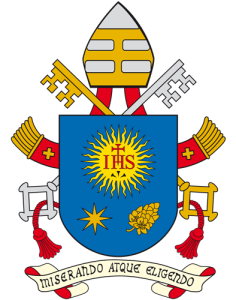 that he used as bishop. The shield has a bright blue background, at the centre top of which is a yellow radiant sun with the IHS christogram on it representing Jesus (it is also the Jesuit logo). The IHS monogram, as well as a cross that pierces the H, are in red with three black nails directly under them. Under that, to the left, is a star representing Mary, Mother of Christ and the Church. To the right of the star is a nard flower representing Joseph, Patron of the Universal Church. With these symbols the Pope demonstrates his love for the Holy Family.
What distinguishes his coat of arms as pontiff is that, instead of the wide-brimmed, red cardinal’s hat atop the shield, it is now crowned by the papal tiara and crossed keys.
His motto—“miserando atque eligendo” (because he saw him through the eyes of mercy and chose him)—is taken from the Venerable Bede’s homily on the Gospel account of the call of Matthew. It holds special meaning for the Pope because—when he was only 17-years-old, after going to confession on the Feast of St. Matthew in 1953—he perceived God’s mercy in his life and felt the call to the priesthood, following the example of St. Ignatius of Loyola.
Click here to learn how to create your own ‘coat of arms.’