Feast of Christ the King

Feast of Christ the King 2016 PowerPoint 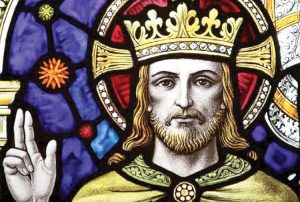 Pope Pius XI created this feast in 1925. The Blackshirts under Mussolini were already in power in Italy. A comical-looking rabble-rouser called Adolf Hitler had just become leader of the Nazi party in Germany. The world lay in the Great Depression and atheism was on the increase. What Pius XI was doing in creating this feast was to say to the world that despite dictatorships and economic collapse and false values, Jesus Christ was still King of the Universe.

In 1969 Pope Paul VI gave the feast its current date on the last Sunday in the liturgical year.

He also established it as a solemnity (which is of highest liturgical rank) and gave it a new title – The Solemnity of Our Lord Jesus Christ, King of the Universe.

This is a tremendous feast with which to end the liturgical year because it turns upside down all the pre-conceived ideas we have about hierarchy, kingship and what it means to be in authority.

… As for the leaders, they jeered and mocked him. “He saved others,” they said “let him save himself if he is the Christ of God, the Chosen One.” The soldiers mocked him too, and when they approached to offer him vinegar they said, “If you are the King of the Jews, save yourself.”

Their idea of kingship is of an all-powerful ruler, controller and dictator. Jesus’ actions have made it clear that he is not that kind of king. He has not come to ‘lord’ it over people. He is not interested in an earthly type of kingdom. His kingdom is very different – it is not of this world. It is not simply that Jesus had spoken about a different place. His words and deeds presented a different way of living, one that is not about control or power but love and service. Jesus’ power comes from God and it is a power that builds people up rather than diminishes them. He doesn’t deny that he is a king but it is not the word he would use. The only thing that matters to him is the truth and that truth is God.

Those who belong to God listen to the voice of Jesus, the servant king, and follow his example. We’re left with the question; who or what do we belong to?

We humans are complex creatures. In our weakness, we can be possessed by evil. In our fragility, we can be closed down by pain. Yet in our endurance, we can be stretched by love. We live in extremely difficult times and the Church is certainly going through a difficult time. Yet today we remember that Pius XI created this feast to help us face the harsh realities of life.

The message of this feast is that we have a hope-filled future and that things will get better for our Church if we can only open ourselves to the teaching, life and rule of our Universal King, Jesus the Christ, God’s Suffering Servant.