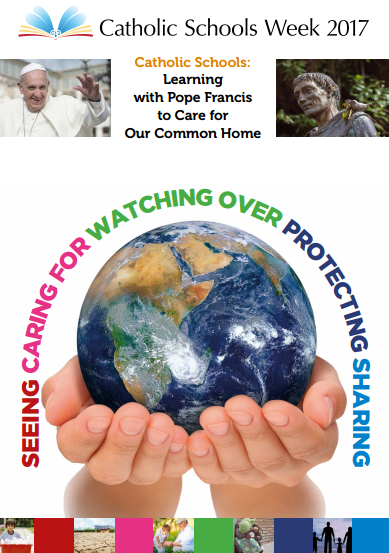 Catholic Schools Week 2017 invites all involved in Catholic education to examine the challenge to an ‘ecological conversion’ as described in Pope Francis’ Encyclical Laudato Si’ and what we understand by stewardship and how we live out the call to take care of our environment. We are called to self-reflect and remind all members of the school community of the founding values; in other words, education is never simply about transmitting simple facts. Catholic Schools Week offers schools an opportunity to celebrate their identity as Catholic Schools.

Resources have been produced to use with R.E. classes during Catholic Schools Week:

CSW17 Reflections for Boards of Management

The school community is encouraged to liaise with the parish with a view to contributing to the celebration of the Eucharist at one of the Masses on Sunday, January 29. It is encouraged that Catholic Schools Week becomes part of the annual life of the parish. It will always begin on the last Sunday in January.

Click here to download a PowerPoint entitled ‘Make the Mass Yours‘ which describes a variety of ways that students can take part. Please note that the PowerPoint provides suggestions, it may need to be modified to suit your school community context and is intended for use in a classroom setting.