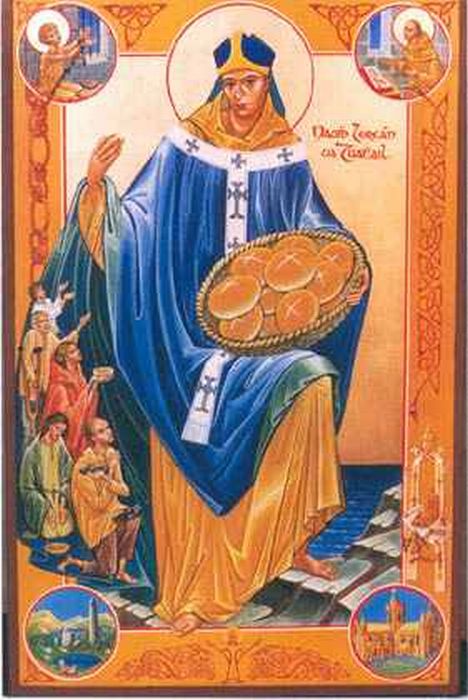 His eventful life can be summarised under eight headings.

1. HOSTAGE.
Laurence’s father was Maurice O’Toole, King of Hy Murray. When Laurence was 10 he was given as a hostage to Dermot McMurrough, King of Leinster, who treated him with great harshness. The boy was sent in chains to a remote area where he was ill-housed, ill-clothed and ill-fed. For two years, the king’s son learned what it was to experience real poverty and oppression.

2. MONK.
After two years, Dermot was forced to release Laurence and send him to Glendalough monastery, where his father could reclaim him. When Maurice arrived, he found his son had fallen in love with the life of the monks and he gave him permission to join the community. Laurence was only 25 when he was elected Abbot, and he proved to be the greatest Abbot of Glendalough since St Kevin its founder. He encouraged learning, built new churches and renewed -monastic life by bringing in monks from the continent. He was unfailing in his care for the poor and sold the monastery treasures to feed famine victims.

3. ARCHBISHOP.
In 1162 Laurence became the first Irish Archbishop of the Danish city of Dublin. Many of the citizens were no more than nominal Christians and he made it his duty to deepen their faith and reform their lives. He introduced Augustinian monks from France to Christ Church Cathedral to reform the liturgy and he became a member of their community. He continued his works of charity, especially towards homeless children, whom he led and housed in his own residence.

4. CONTEMPLATIVE.
Laurence was a man of prayer. He rose in the early hours to sing the office with the other monks in the cathedral and often stayed on afterwards, deep in prayer. Then he would walk for a time in the graveyard, watching and praying over the city as it woke to another day. When his duties allowed him, he liked nothing better than to escape to Glendalough and spend a few days in solitude in a lakeside hermitage which could be reached only by boat.

5. MEDIATOR.
The Normans landed in Ireland in 1190. The following year they besieged Dublin under their leader, Strongbow. Laurence met Strongbow to arrange a peace but the Normans attacked while the talks were going on. They seized the city, and began killing the citizens and looting their houses. Laurence saved the lives of many by the sheer force of his presence and he carried the bodies of others in his own arms to be buried. In spite of many setbacks, he was to continue his efforts as peace-maker to the end of his life.

6. TRAVELLER.
For the last ten years of his life, Laurence was a constant traveller. He often visited England in his efforts to bring about peace between the two countries. Sea travel was hazardous and shipwrecks were common. More than once, his ship was caught in a Violent storm and its safe arrival was attributed to the power of his prayer. Travellers believed that when he was on board, they had nothing to fear. His efforts were not entirely in vain. In 1175 he was one of the signers of the Treaty of Windsor between England’s King Henry II and lreland’s High King, Roderick O’Connor.

7. LEGATE.
Laurence led the six Irish bishops who attended the Third Lateran Council in Rome in 1179. Pope Alexander III was so impressed that he appointed him Papal Legate to Ireland with the responsibility of reforming the Church in Ireland and defending it against attack. On his return, Laurence summoned a council of the Irish Church at Clonfert which took firm action against the abuses of the time. It was only his death that prevented him from completing his work of reformation.

8. SAINT.
Laurence left Dublin for the last time in the spring of 1180. His mission was to settle a dispute that had arisen between the English and Irish Kings. Henry II, the man responsible for the murder of St Thomas a Becket, Archbishop of Canterbury, received him badly, abused him roundly and forbade him to return to Ireland. Then he went to visit his dominions in Normandy. Laurence followed him, sick and exhausted though he was. He died in the monastery at Eu, without having met the King. His tomb in Eu rapidly became a place of pilgrimage and many miracles were attributed to his intercession. He was canonised in 1225.

The above summary of the life of St Laurence O’Toole is based on THE MAN IN THE MIDDLE by Desmond Forristal, published by Veritas, which is recommended for further reading.